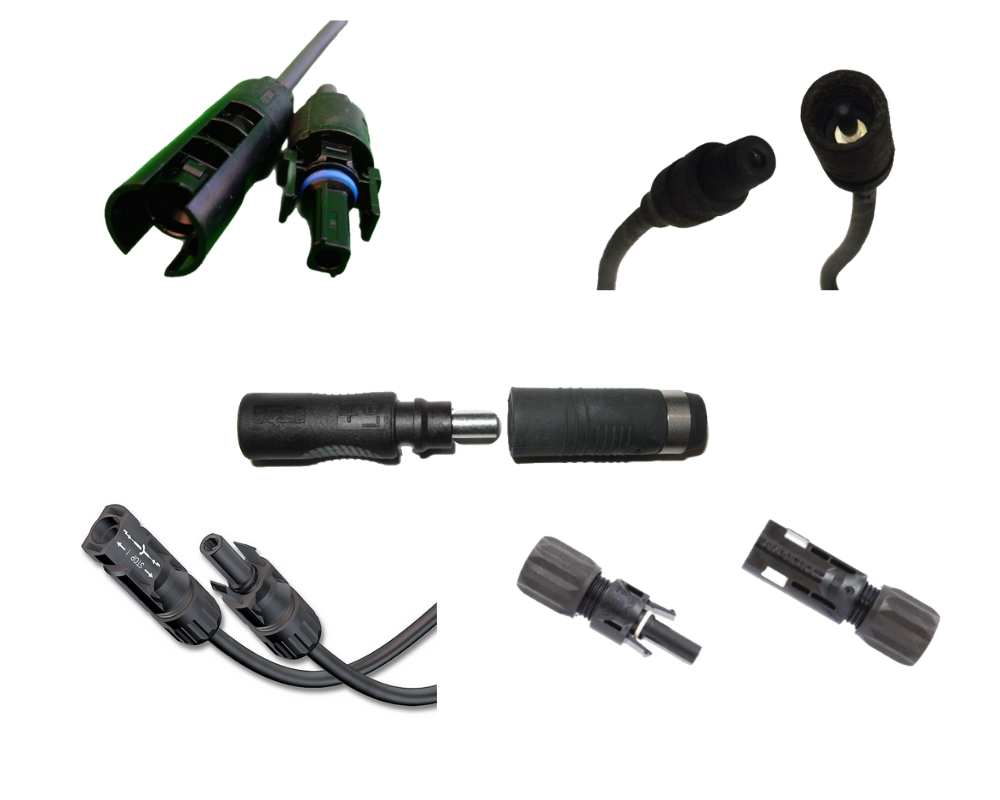 So you want to know about solar panel connector types? Well, you’re in the right place. Solar Smarts is here to help shine some light on the sometimes murky subject of solar power.

To start with, the first thing you need to know is that there are five different types of solar connectors that you are likely to come across: The MC4, MC3, Tyco, Amphenol, and Radox connector types. Of those five, two are no longer in use due to non-conformance with modern electrical code but can still be found on some older systems. While, of the other three types, there are really two main connectors that dominate the market.

There are also several other types of connectors that you might come across while designing your solar array, but they are far less common and wouldn’t be used by any reputable solar installer.

In addition to the connector type itself, each connector also can come in many different shapes such as T-joint, U-joint, or X-joint. Each one refers to a different shape that you might need in order to connect your solar modules together and fit them into the desired space and arrangement.

While choosing a solar connector for your project, be sure to consider factors like shape and maximum voltage in addition to just the type of connector. Since each connector is one of the most vulnerable points in your new solar project, choosing a well-regarded and reputable manufacturer will be very important in order to keep your system’s efficiency high and reduce the risk of fires.

Many connectors will also require a special tool in order to crimp and/or connect/disconnect the connector. Check the comparison chart below to see which connectors require special tools and other quick stats about the solar connectors.

Multi-Contact was one of the most well-regarded and well-established companies manufacturing solar panel connectors. They made both the MC4 and MC3 connectors which both referred to the model number as well as the specific diameter of the connector wire. Multi-Contact was bought by Stäubli Electrical Connectors and now operates under that name, but retains the MC model numbers for its connector lines.

MC4 connectors are the most commonly used connectors in the solar industry. They are a single-contact electrical connector with a four millimeter contact pin (hence the ‘4’ in the name). MC4’s are popular because of their ability to easily construct a string of solar panels together by clipping them together by hand, while also having a safety lock that prevents them from becoming separated accidentally.

Since 2011, the MC4 has been the primary solar panel connector on the market – equipping nearly all solar panels in production.

In addition to the safety lock, MC4 connectors are also weather resistant, UV proof,  and designed for continuous outdoor use. Some other manufacturers do market their connectors as being intermatable with MC connectors, but may not conform to modern safety standards so be sure to check before mixing connector types.

MC3 connectors are the 3-millimeter version of the now ubiquitous MC4 solar connector (And certainly not to be confused with the much more popular MC Hammer 😉 ).

The MC3 connector type was rated for 20A and 600V maximum, so was much more popular for smaller solar panels than are in standard use today for residential applications.

The MC3 connector was largely discontinued when the National Electrical Code was updated for solar applications and this connector style no longer met the safety standards due to not having a built in locking mechanism that would prevent unintentional disconnects and arcing.

The Tyco Solarlok is a largely discontinued connector style that was introduced by Tyco International in order to try and meet the National Electrical Code updates that resulted in the demise of the MC3 connector. The Solarlok became very popular in the US at first, but struggled to gain international popularity. Due to Tyco being the only manufacturer of the Solarlok connector, they are often referred to simply as ‘Tyco connectors’.

In most solar applications, connector manufacturers designed panels so that one end of a cable would be permanently mounted, while the other end of the cable would have the connector. This allowed many panels to be joined together quickly by simply snapping together the neighboring connectors. Solarlok connectors instead reimagined the entire system, adding sockets to the panels themselves and then removing the permanently mounted cables.

Then Tyco added the Solarlok connector to both ends of the cable, which solved many problems (such as the permanent cable not being long enough) but also created new problems in that it was now possible to accidentally connect the positive end of one panel to the positive end of another panel by confusing the wires. To try and solve this, Tyco created special “keys” on their sockets and plugs to indicate the polarity and prevent crossed wires.

In practice, everything fell apart and there was no uniformity between manufacturers which caused them to fall out of favor.

Founded in 1932, the Amphenol Corporation is a major manufacturer of lots of cable types – from television cable to fiber optics. The name is actually a portmanteau from the corporation’s original name, American Phenolic Corp when they produced radio tubes and then later expanded during WWII.

The Amphenol Helios 4, or H4, solar connector was a response to the wildly popular MC4 connector and is very similar in design – with a bayonet-style connector and teeth that lock into place.

Due to the very easy snap-lock mating and reliable crimp terminations, as well as long-term UV and ozone resistance, the H4 is a very reliable and ideal connector for solar installations. The H4 is fully intermateable with other industry standard solar connectors.

Radox was a collection of solar products that were produced by the Austrian manufacturer, Huber & Suhner, but due to the comparative popularity of the solar connectors, the term is now synonymous with the connector. Radox connectors were most widely used in Norway with REC solar panels and found little adoption outside of that market.

Once the US passed the new National Electrical Code standards that required a locking mechanism, the Radox connectors no longer were code-compliant and quickly fell out of use in most markets. While many other manufacturers would update their connectors to attempt to remain compliant with the NEC regulations, Radox did not update its connectors and they are now obsolete and disappeared from the market.

There are many other, smaller, connector manufacturers on the market but few have achieved the mass adoption that the Helios and MC4 have. For instance, the Leader Solar Panel connectors claim to be intermatable with 800+ solar module connectors and able to operate with 2.5mm-6mm cables.

However, there is a real risk in using off-brand or mixing brands of solar connectors due to the potential for a less-than-snug fit causing arcing and potentially starting a fire. This has been such a concern that some manufacturers have actually published disclaimers about using so-called compatible off-brand connectors.

The difference in cost between the name brand and the off brand connectors are so little that any cost savings would actually be pretty negligible. Most solar aficionados would do well to stick to the main brands.

Still unsure where to start in designing your perfect solar system? Check out our complete Solar Glossary to brush up on your solar terms and feel confident in your solar journey.